Cryoablation of the para-Hisian region

BASIS: the ablation of the para-Hisian region is a challenge due to the risk of inadvertent lesion of a bundle of His. Cryoablation, due to its slower progression, allows interruption of the application in case of signs of undesired lesions and catheter adhesion during the applications, which has made cryoablation the ideal method for these patients.
OBJECTIVES: to demonstrate the results of an initial series of patients referred for cryoablation of para-Hisian pathways.
PATIENTS AND METHODS: From April 2015 to August 2017, 13 patients were referred for cryoablation due to the necessity for a para-Hisian approach detected in previous ablation procedures. Of the 13 patients, seven were submitted a radiofrequency ablation attempt (RF) and presented failure or recurrence, ?ve performed only electrophysiological studies, and no ablation was attempted, and one was indicated primarily. The mean age was 32 ± 16 years. Eleven patients had manifest anomalous pathways (APs), one hidden and one nodal reentrant tachycardia (NRT) with a transient atrioventricular block (AB) during RF. A cycle of 4 minutes followed by one more cycle in case of a positive result.
RESULTS: Of the 13 patients, 11 had an acute success in eliminating the accessory pathway. One patient had multiple accessory pathways, one right side, and one left side. In this patient, it was possible only the ablation of the left pathway. In all others, it was observed exuberant Hisian potential at the point of application with success. The patient with NRT was ablated in the M region without intercurrences. Four applications were required on average to eliminate the accessory pathway successfully. The mean local temperature was -74 ºC. In ?ve patients, the occurrence of third-degree right branch block (RBB) was observed. In one patient, early application of RBB was interrupted and the bonus application was not applied. This was the only acutely successful patient who presented clinical recurrence. Transient AB was not observed in any patient. No complications were observed.
CONCLUSION: Cryoablation of para-Hisian pathways and NRTs in regions surrounding the His was an e?ective method for treatment in this population of patients refractory or refused for RF treatment. The occurrence of acute RBB does not seem to be a criterion for the interruption of applications. 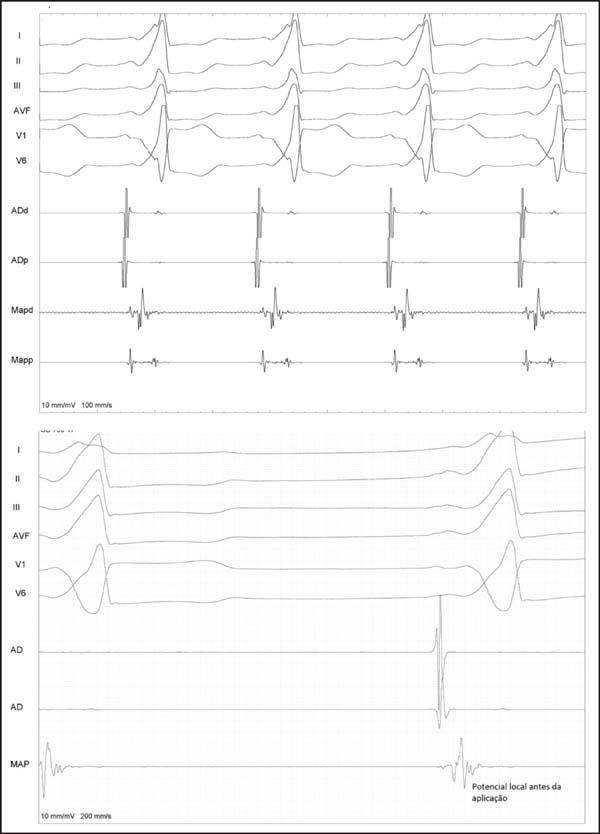 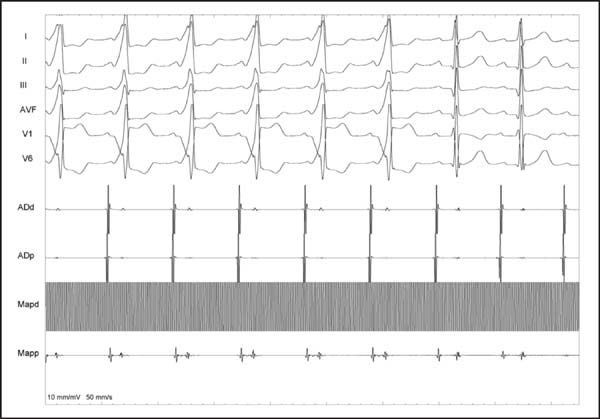 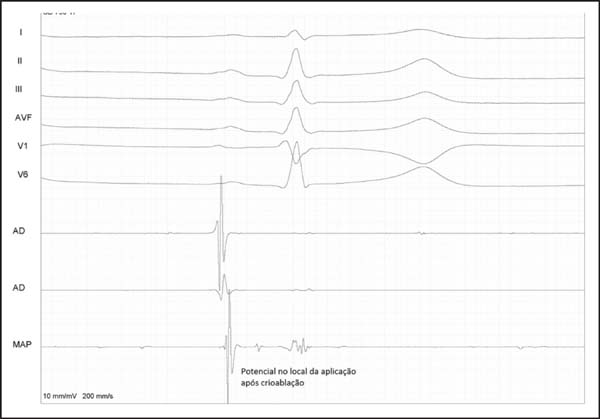 Incidence of accessory pathways was estimated to be three-four per 1.000 live births. The anomalous (AP) or accessory pathways are muscle bundles that electrically connect the atrium to the ipsilateral ventricle, permitting abnormal electrical conduction despite physiological atrioventricular nodal (AV) conduction. It is believed that they are formed by failure during the embryonic segmentation of the cardiac tube that forms atrium and ventricles, causing muscular connection that goes beyond the fibrous valvar ring. APs can be located in the mitral annulus (65% of cases) or in the tricuspid annulus. It is estimated that 25% of the pathways are septal and about 10% are positioned in the anteroseptal region near the bundle of His.1

Surgical treatment of accessory pathways by open surgery and subsequent electrofulguration ablation were rapidly replaced by the development of radiofrequency ablation (RF) in 1987.The high success rates and low risk of complications, when compared to previous techniques, promoted the great dissemination of the method and support the current guidelines for the treatment of preexcitation syndromes.The failures of the procedure relate mainly to the unfavorable location of the accessory pathway in a minority of patients. The para-Hisian location is related in large series to a risk of up to 20% of total VA block development during the release of the RF pulse.

The RF current is an alternating high frequency unipolar electric current between the distal electrode of the ablation catheter and a large surface indifferent electrode positioned in contact with the patient's skin. The tissue lesion is caused by the resistive heating of the tissue in contact with the tip of the catheter and probably also the direct electrical effect. The produced cellular aggression can install quickly and irreversibly but tends to be deeper and more stable, depending on the time of application, temperature and power reached and the contact of the catheter with the tissue.

Cryoablation was initially developed to replace surgical resection of tumors.The first catheters for cryoablation of arrhythmias began to be produced in the 1990s.3 Catheters with 4 and 6 mm tip are currently used for point ablation and balloon catheters for isolation of pulmonary veins.

To produce catheter cooling, liquid nitrogen is pumped into the catheter, with internal evaporation occurring at its tip, which lowers the local temperature to -80 ºC. Before producing irreversible lesion, there is the possibility of cryomapping. Cryomapping consists of cooling the tissue to -30 ºC for up to 60 seconds, creating a totally reversible lesion. A great advantage of the technique is the cryoadhesion phenomenon, which promotes great stability of the catheter when cooled, with freezing of the tissue and electrode tip in the contact region.4

The cold cell lesion is composed of three phases: freezing, inflammatory and hemorrhagic, and the replacement of acute fibrosis lesion. The freezing phase generates cell death by the mitochondrial lesion. The inflammatory phase occurs within the first 48 hours of application. Local fibrosis occurs between the first and the 24th week. The extracellular matrix remains intact and there is little or no endothelial lesion, which reduces the risk of thromboembolism. Cryoablation lesion does not increase after the end of the application, which may occur with RF lesion

The described characteristics of cold ablation rapidly promoted studies with nodal reentry tachycardia ablation (NRT), accessory pathway mediated tachycardias and atrial fibrillation that revealed a high cure rate and safety of the method, comparable to RF ablation. The use of para-Hisian ablation has aroused special interest in the theoretical possibility of avoiding irreversible damage to the driving system and increasing the success rates of these procedures. Several series of cases of cold ablation of para-Hisian pathways have been described.

It describes in this article the consecutive initial series of patients submitted to cryoablation of the para-Hisian region.

A series of 13 consecutive cases of patients submitted to cryoablation for para-Hisian pathways from April 2015 to August 2017.

Thirteen patients were referred for cryoablation due to the necessity for a para-Hisian approach detected in previous ablation procedures.

Of the 13 patients, seven were submitted RF ablation attempt and failed or relapsed, five performed only electrophysiological studies and no ablation was attempted, and one was indicated primarily for cryoablation based on the presumed location of the accessory pathway based on the electrocardiogram (EKG ).The mean age was 32 ± 16 years.

Eleven patients had a manifest anomalous pathway of ventricular pre-excitation to the EKG, one had an anomalous occult pathway and one NRT AP with transient AP block signs during a previous RF ablation procedure.

The procedures were performed under sedation guided by an anesthesiologist. The right femoral access was used. A cryo cycle of 4 minutes followed by another cycle of 4 minutes in case of a positive result. In 12 of the 13 patients, the applications were complete. Patient follow-up time was eight to 36 months.

The Figs. 1 to 3 show the obtained results. Of the 13 patients, 11 had an acute success in eliminating the accessory pathway. One patient actually had multiple accessory pathways, one right side, and one left side. In this patient, it was possible only the ablation of the left pathway. In all others, it was observed exuberant Hisian potential at the point of application with success.

The patient with NRT was submitted to ablation in the M region without intercurrences with the disappearance of the nodal shift.There was no induction of active junctional rhythm during cryoablation. After the first application, slow pathway ablation was identified and the second application of 4 minutes was performed.

It took 4 applications on average to eliminate conduction by the accessory pathway.The average local temperature was -74°C. In five patients, the occurrence of third-degree right branch block (RBB) was observed during the application.

The mean duration of the procedures was 52 minutes. The mean scan time was 6 minutes.

In one patient, the RBB application was stopped early (130 seconds) and the booster application was not perfor-med.The return of ventricular pre-excitation was observed 14 days after the procedure. This was the only acutely successful patient who presented recurrent pre-excitation or recurrence of palpitation symptoms.

No transient AP block of any degree was observed in any patient. Measurements of the HV intervals did not reveal abnormal values after the applications. No complications were observed in the short and medium term. The patients did not a present recurrence of tachycardia or ventricular pre-excitation or AP block at follow-up.

Para-Hisian accessory pathways have always been a challenge for electrophysiology in the era of RF ablation because of the risk of irreversible AP node damage during RF pulse release. The AP node lesion can install quickly without warning signs.

Several RF mapping and ablation techniques have been described in an attempt to increase the success of ablation and decrease the risk of the procedure in the right anteroseptal pathways. Mapping and ablation of the right coronary cusp, use of electroanatomic mapping and energy release with low power, approach by superior access (jugular or subclavian) and use of magnetic navigation system were published in case reports.

Cryoablation has proven to be an effective and safe method in arrhythmias in which the region to be injured is contiguous to the bundle of His. The technique proved safe even in children and with high rates of long-term cure in several series of patients reported in the literature. The cryoablation procedure is similar to the RF ablation pattern with respect to femoral venous access and the use of radioscopy.

There are no direct published comparative studies of RF ablation and cryoablation. Our initial case series shows a high success rate and safety of cryoablation in para-Hisian accessory pathways in accordance with current literature.