METHODS: Between July 2015 and April 2016, 196 patients with pacemakers were attended on an outpatient basis. Of these, 60 had cardiac arrhythmias recorded by the pacemaker and were invited to participate in the study. Data collection was done through a structured interview containing four questions: gender, age, follow-up with cardiologist and use of anticoagulants.
RESULTS: Subclinical AF was recorded in 35 (17.8%) of the total of 196 patients. Of these 35, 16 (45.7%) did not follow a regular cardiology service and 29 (82.8%) did not use anticoagulant medication. No statistically significant relationships were found between age, follow up with a cardiologist, and presence or absence of subclinical AF in the patients studied.
CONCLUSION: A significant portion of outpatient patients with pacemakers have AF recorded by the device. However, although essential, almost half of these do not proceed with the clinical follow-up with cardiologist and less than a fifth with AF makes use of anticoagulant therapy.Objective: Cardiac pacemaker records atrial fibrillation (AF). This condition can cause serious hemodynamic consequences to patients, who should be assisted by a cardiologist. This study aimed to document and investigate, in a tertiary hospital, the prevalence of subclinical AF in patients with a cardiac pacemaker. 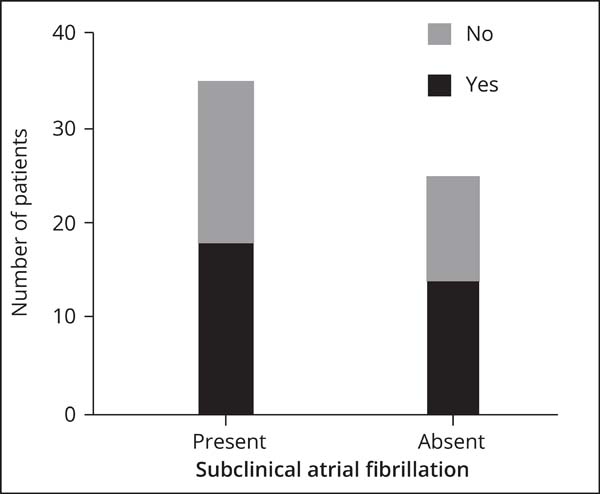 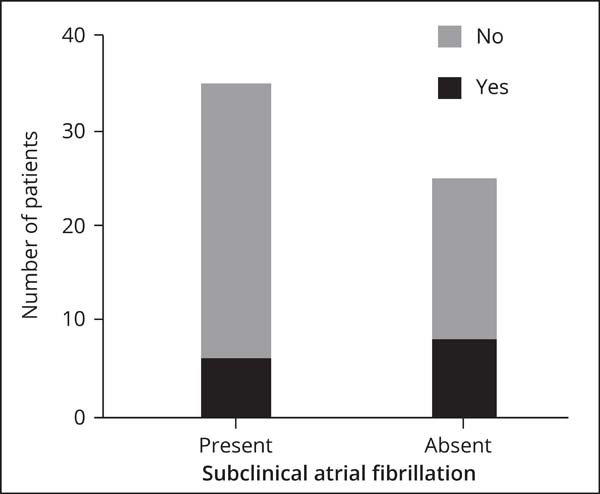 Atrial fibrillation (AF) is the most common sustained cardiac arrhythmia currently; affects approximately 33 million people worldwide1 with an estimated prevalence of 1 to 4% in adults, and may be paroxysmal2. Its clinical importance lies in the fact that most patients have little or no specific symptoms of this arrhythmia3, besides being associated with several hemodynamic complications and increased morbidity and mortality in patients who has it2. Therefore, its early detection - although difficult most of the time - is useful for monitoring and adequate management of patients in order to avoid secondary complications2,4.

The diagnosis and monitoring of subclinical AF its asymptomatic form - is preferably performed from electrocardiogram4; however, in patients with a cardiac pacemaker, it is possible to diagnose it by the analysis of the recording and storage of data of the device5. Pacemakers not only perform their function of identifying and correcting problems in cardiac electrical stimulation but are also able to accurately record abnormal cardiac events, registering the day, time and duration6. Studies point to the prevalence rate of subclinical AF around 10% in patients with cardiac pacemaker6,7 and may vary up to 55.3% for those aged 65 or over5,7.

It is known that all patients with a cardiac pacemaker who had AF recorded in their device should have a regular clinical follow-up with a cardiologist for control and monitoring8.Treatment under oral anticoagulation is indicated for the absolute majority of AF patients, except in cases where the hemorrhagic risks outweigh the benefits of preventing thromboembolic complications of arrhythmia4,8. However, there are few international studies that evaluate the adequate management of patients with AF with cardiac pacing, and there is no recent Brazilian study that evaluates this scenario in thepatients treated by the Sistema Unico de Saude (SUS).

Due to the necessity and importance of adequate clinical follow-up of these patients, this study aims to raise the prevalence of atrial arrhythmias and subclinical AF in patients with cardiac pacemakers, as well as to investigate how many of them undergo regular clinical follow-up with a cardiologist and use anticoagulant medications.

This is an observational study with a quantitative and descriptive approach. 196 patients with a cardiac pacemaker in the period between July 2015 and April 2016 were attended on an outpatient basis. Of these, 60 patients had cardiac arrhythmias recorded by the pacemaker and were invited to participate in the study.

The setting of the study was the Pacemaker Ambulatory of Hospital de Clínicas (HC) of the Universidade Federal do Paraná (UFPR), which is part of the Cardiovascular Surgery Service and is located in the Ambulatory Medical Service (SAM 2) of the hospital. Outpatient care takes place on the first Monday of each month and is assisted by pacemaker technicians representing the different brands of devices used by the service.

To the 60 patients selected, the objectives of the research were explained and presented the Term of Free and Informed Consent, signed by these and the researchers. Then, the researchers applied a structured interview, which contained two sociodemographic questions (sex and age) and two clinical questions about regular follow-up with a cardiologist and use of anticoagulant drugs.

The collected data were recorded and organized in Excelr software table (Microsoft, 2013) and statistical analysis performed by R (R Core Team, 2015; version 3.2.3) software. Absolute and relative frequencies were obtained from the following data: the presence of arrhythmic event; the presence of subclinical AF; gender; follow-up with a cardiologist; and use of anticoagulants.

For statistical evaluation, the results were submitted to Fischer's exact test, when qualitative and dichotomous variables, and logistic regression test, when there was a need to predict cause-effect relationships between two variables. Mean, median, minimum, maximum, and standard deviation of the variable age were also obtained, also submitted to Student>s t-test for comparison of paired samples. The reference value for the p-value of 5% was considered as a determinant of the statistical significance of the sample results.

More than half of the 60 patients studied (53.3%, n = 32) had regular follow-up with a cardiologist, and among the 35 patients with subclinical AF, 18 (51.4%) underwent cardiac monitoring. Of the 25 patients who have exclusively ventricular arrhythmias, 14 (56%) follow up with a cardiologist and the other 11 (44%) do not (Fig. 1). There was no statistically significant difference between the two groups (subclinical AF and exclusively ventricular arrhythmias) for regular follow-up with cardiologists (p = 0.7964).

Of the 60 patients studied, 14 (23.3%) used anticoagulants. Of the 35 patients with subclinical AF, 29 (82.8%) did not use drugs of this class (Fig. 2). Taking into account the follow-up with a cardiologist, it was observed that 16 patients with subclinical AF, in addition to not taking anticoagulante drugs, did not proceeded with medical follow up (45.7%).

Figure 2. Use of oral anticoagulant drugs.

The main results of this research highlight the high prevalence (30.6%) of occurrence of cardiac arrhythmias in addition to the underlying diseases that indicated implantation of a pacemaker in the patients observed. Cardiac arrhythmias recorded by pacemakers - also called «events» - are broken down in telemetry and can be archived by the technicians and then analyzed by the cardiac surgeon in charge.

AF, in its subclinical form, is responsible for more than half of the arrhythmias in the studied group. It is associated with a 2.5-fold increased risk of possible hemodynamic complications, such as cerebrovascular accident (stroke) and systemic embolism7. The rate of subclinical AF observed in the patients in this study was 17.8%, whereas the literature presents variable rates: some studies6,7 rates close to 10%, while others5,9 found rates close to 40%. This observed difference may be related to the data collection time. Healey et al.7 followed patients for a period of three months and obtained a rate of 10.1%, while Cabrera et al.9 followed patients for a period of 5.5 years and obtained a rate of 36.9%. Another important factor that may influence the rate of occurrence of AF is the criterion of patient selection, since male, Caucasian, smokers, obese patients with a previous history of cardiovascular problems are at greater risk of developing AF1.

In contrast, this research demonstrated a greater chance of AF occurring in female patients, which contrasts with results presented in the literature. Schnabel et al.10 risk factors for the development of AF, one being the male gender. However, there are studies that found no significant relationship between gender and the occurrence of AF in patients with pacemakers11-13.

Still in relation to the sociodemographic data analyzed, a predominance of the elderly in the study group (mean age 68 years) was observed, although no significant relationship was found between this aspect and the presence or absence of subclinical AF. It is known that age above 60 years is one of the risk factors for the development of AF10and other studies were able to relate this information to AF detected by implantable devices5-7,9,14. One variable studied in this study, of great clinical importance, was the regular follow-up of cardiac

arrhythmias in a cardiologist doctor. The guidelines point to the need for follow-up and clinical cardiological management for those with cardiac arrhythmias, whether atrial or ventricular arrhythmias15,16. The cardiologist is responsible for investigating and choosing the ideal therapy for the control and attenuation of possible arrhythmic symptoms, in order to provide a better quality of life for patients with these conditions, as well as to prevent related complications15,16.

The present study found that approximately half of the patients with subclinical AF (48.6%) do not have a regular cardiological follow-up. A similar relationship was observed in the group of patients who presented ventricular arrhythmias; of these, only 56% follow up with a cardiologist. Therefore, there was a lack of information on this group about the importance of having a cardiological follow-up, as well as the difficulty of access to cardiologists by the patients in this study.

It should be noted that a group of patients studied in this research, besides not having regular follow-up with a cardiologist, does not use anticoagulant drugs. This group denoted the rate of 45.7% among patients with subclinical AF and was considered the most vulnerable to the thromboembolic complications of this asymptomatic disease.

The main limitation of this study is its short period of data collection (10 months) and, consequently, the small sample size used for statistical calculations. Therefore, new research is needed to analyze the variables studied in a larger number of patients, in order to increase the accuracy of the calculated results

A significant portion of the patients with pacemakers treated ambulatorily in HC-UFPR have AF recorded by the device. However, although primordial, almost half of these patients do not undergo clinical follow-up with a cardiologist and less than one-fifth of patients with AF undergoing anticoagulant therapy. New studies that increase the number of patients studied are necessary to increase the statistical accuracy.