OBJECTIVE: To determine the incidence of postoperative atrial fi brillation (PAF) of cardiac surgery, its impact on morbimortality and duration of hospital stay in a tertiary cardiology center of the state of Santa Catarina, Brazil.
METHODS: Cohort study with 134 adult patients submitted to cardiac surgery.
RESULTS: the incidence was 32.8%. After multivariate analysis, patients who did not receive beta-blockers were associated with PAF with a relative risk odds ratio (RR) 10.73 (p <0.001). The highest rate of cardiovascular events (cerebrovascular accident, mortality, and acute coronary syndrome) was 25% in the PAF group. 10% (RR 3.21; p = 0.035) which, consequently, generated longer hospitalization time in these patients (19.1 vs. 12.5; p = 0.01).
CONCLUSION: the incidence of PAF was high, caused a signifi cant increase in morbimortality and duration of hospital stay, and consolidated the role of beta-blocker therapy in its prevention, and may serve as a basis for future prevention policies. 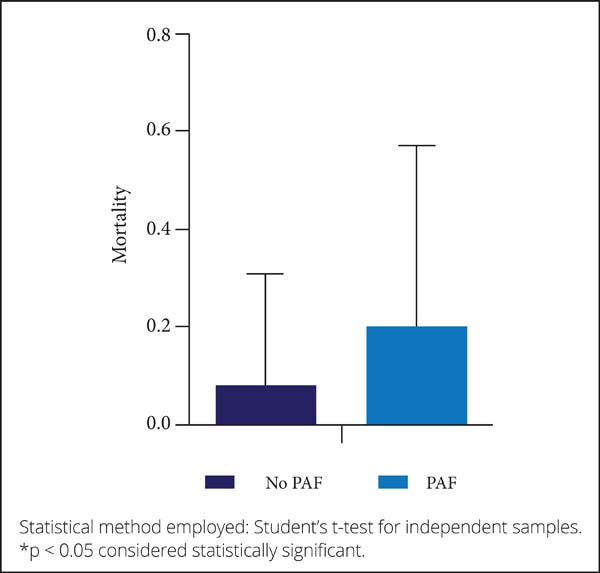 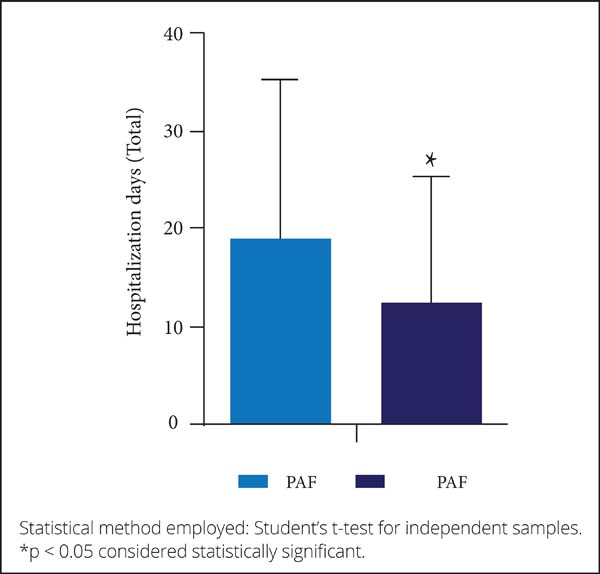 Postoperative atrial fibrillation (PAF) is the most prevalent complication after cardiac surgery1,2. In the postoperative period (PP) of cardiac surgery, the incidence of PAF varies between 25 and 62%, depending on the type of surgery2,3. PAF predisposes the patient to a higher incidence of thromboembolic events, hemodynamic instability, and increases the chance of a cerebrovascular accident (CVA) by 2.5 to 4.5 times4,5. The duration of hospital stay of patients with PAF is also longer, causing higher costs to the health6.

The peak incidence of this arrhythmia is on the second to fourth postoperative day, and studies indicate that its risk may be reduced with the administration of specific perioperative drugs7,8. The identification of patients at high risk for developing PAF may be of great value for early intervention and preventive measures to reduce morbimortality5. Although some factors, such as advanced age and underlying comorbidities, are already established for the development of this tachyarrhythmia, the pathophysiological mechanisms are not yet fully elucidated, but activation of the sympathetic nervous system and the inflammatory process caused by surgery are the most accepted1,9-11.

Although these tachyarrhythmias are considered transient and benign, in specific patient clinical profiles, they may have different outcomes1,4. Despite efforts to reduce its occurrence, the improvement of the surgical technique and anesthesia methods did not cause a significant reduction in this complication, and its prevention is still a challenge3,4.

This study aims to evaluate the intra-hospital outcomes associated with the development of PAF. Besides, to determine the incidence and its associated factors in a tertiary cardiology center of Santa Catarina.

A retrospective historical cohort study of 147 adult patients (age = 18 years) who submitted to cardiac surgery (with or without extracorporeal circulation due to ischemic heart disease, and/or valve associated or not, another procedure) in 2015 at the Hans Dieter Schmidt Regional Hospital, in Joinville, State of Santa Catarina. Of these, 13 patients who were diagnosed with persistent or permanent, paroxysmal atrial fibrillation (AF) were excluded, leaving 135 patients for analysis. The outcomes studied were the occurrence of PAF, clinical [mortality, duration of stay, cardiovascular events - acute coronary syndrome (ACS), and CVA] and factors associated with the development of PAF.

According to the institutional protocol, all patients were submitted to continuous cardiac monitoring for 48 hours in an intensive care setting and daily electrocardiographic examinations until hospital discharge. Additional electrocardiograms were performed for cardiovascular symptoms and/or asymptomatic tachycardia.

AF was defined as supraventricular arrhythmia whose electrocardiographic tracing showed "f" waves of variable morphology and amplitude, with irregular ventricular rhythm. Episodes of AF lasting at least 30 seconds or requiring treatment due to symptomatology or hemodynamic instability were considered for work.

Echocardiographic parameters of left ventricular ejection fraction (LVEF) and left atrial diameter (LA) were collected by the most recent exam found in the records, which includes both transesophageal (TEE) and transthoracic (TTE) examinations. The ejection fraction was calculated using the Teicholz or Simpson methods, according to the presence of segmental dysfunction. Atrial diameters were assessed using the M mode.

The medical records were reviewed in order to record the clinical information necessary to complete the clinical protocol. These clinical diagnoses were defined according to the previous publications12.

The strength of association of each factor for PAF was measured by relative risk (RR) estimates with 95% confidence intervals (95% CI). Data analysis was performed with the aid of the SPSS version 8.0 program. In multivariate analysis, binary logistic regression and the odds ratio (OR) were used as an association measure. In the model construction process, the importance of each component was verified by the likelihood ratio test. A value of -2log likelihood was used (deviance), measured to determine how well the model fits the data. Interval estimates were calculated with 95% CI. All variables with p <0.25 (univariate analysis) were candidates to enter the model, according to the methodology of Hosmer and Lemeshow13. Only variables with p <0.05 remained in the model.

Of the 134 patients submitted to cardiac surgery, 32.8% developed PAF. This incidence is related to postoperative time and showed that about 80% occurred from the second to the fourth postoperative day, with a peak on the third day (40%).

Regarding the clinical profile of the patients, the only ones that showed significance in bivariate analysis were over 70 years (p = 0.003) and non-use of beta-blocker therapy in the perioperative period (p <0.001) (Table 1).

Table 2. Variables associated with postoperative atrial fibrillation (PAF) in logistic regression (univariate and multivariate analysis with and without the PAF outcome).

┼ Variables that remained in the final model p < 0.05.

Table 2. Variables associated with postoperative atrial fibrillation (PAF) in logistic regression (univariate and multivariate analysis with and without the PAF outcome).

Figure 1. Mortality with and without postoperative atrial fibrillation (PAF).

Figure 2. Days of total hospitalization with and without postoperative atrial fibrillation (PAF).

Download
Figure 2. Days of total hospitalization with and without postoperative atrial fibrillation (PAF).

Despite the evolution of surgical techniques and PO management, PAF remains a very common complication14-17. An incidence of 32.8% was found, similar to the average reported in other published studies18-20. It is worth mentioning that continuous monitoring was used during intensive care and after intermittent electrocardiogram, which may have underestimated asymptomatic PAF. In some studies where continuous monitoring was used, rates reached44 to 64%; however, this modality is adopted in a minority of published works21,22. Therefore, the data show a high incidence, stimulating the search for factors that contribute to PAF, thus being one of the objectives of this study.

The chronology was consistent with previously published data, in which most episodes occur until the fourth day of the postoperative period; in this study occurred in 80% of cases23.

Before mentioning the factors associated with PAF, it is crucial to establish the multifactorial mechanisms associated with the development of arrhythmia24. Among them, perhaps the most easily approached by prophylactic measures is an autonomic imbalance, caused mainly by sympathetic hyperstimulation through the use of beta-blockers medications. In this study, it was indeed found that the non-use of this drug class had a more significant impact on the occurrence of arrhythmia. After multivariate analysis, a CR of 10.73 was obtained, reflecting the fundamental importance of the sympathetic nervous system block in this clinical context. Moreover, this is confirmed in the literature by a meta-analysis of 4.074 patients who found RR of 0.35 (95% CI 0.26-0.49) associated with this protective finding with therapy25. Importantly, the worst clinical scenario described would be the non-use of medication in pre and PO25,26. These results solidify this factor as fully modifiable through medical awareness of its use during this critical period. Also, they could be used as guidance or indicators for policies to prevent this complication.

Older age 70 years is an essential predictor of PAF in the literature. Mathew et al.27 documented that, for each decade, there is a 75% increase in the chance of arrhythmic occurrence. The researchers concluded that based on age alone, anyone over the age of 70 is considered at high risk for developing PAF27. In this study, there was an association in bivariate analysis, but after logistic regression age did not remain significantly statistical, most likely related to sampling size.

Regarding clinical outcomes, total mortality is associated with the development of PAF. When using the Society of Thoracic Surgeons (STS) database, reaching 49.264 patients, the group that developed PAF has twice the chance of mortality (RR 2.04, p <0.001)28. Confirming STS data, Almassi et al.29, in an analysis of 3.855 patients submitted to cardiac surgery, found intra-hospital mortality of 6% in the group of patients with PAF vs. 3% in the group without arrhythmia. In this study, there was a tendency to increase with PAF, but without statistical significance, which could be explained by the association of sample size (reduced) and incidence of mortality (increased) when compared to studies already published.

PAF is associated with an increased incidence of major morbid events29, such as increased thromboembolic risk30 and myocardial ischemia, and this is particularly pronounced in increased CVA, as analyzed in the STS database between 2004 and 2005 of myocardial revascularization surgeries, where CVA prevalence increased (4 vs. 1.9%, p = 0.002)6. In this study, they grouped into a combined outcome of CVA and ACS mortality and reached a CR of 3.2 (p <0.05), which demonstrates the morbid potential of PAF.

Importantly, as the data source is from a clinical database, we have an estimation of the "real world" and data from the Brazilian public system. This consolidates future PAF prevention policies to minimize clinical and financial effects on health systems.