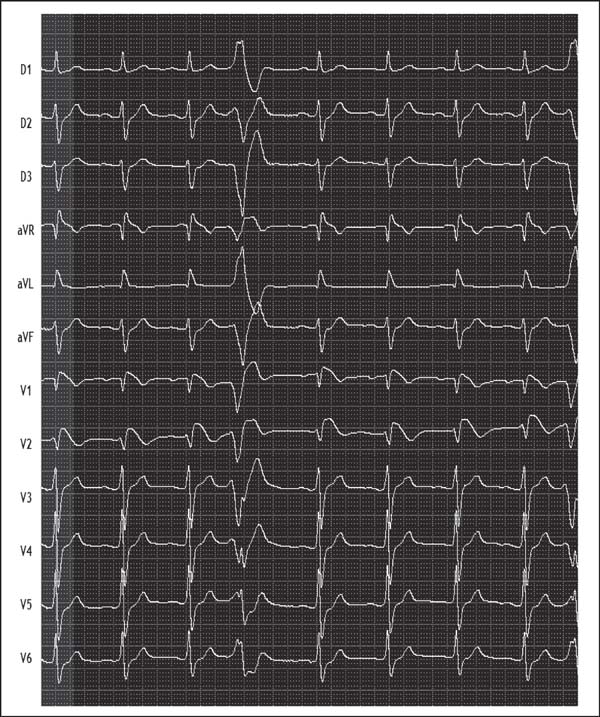 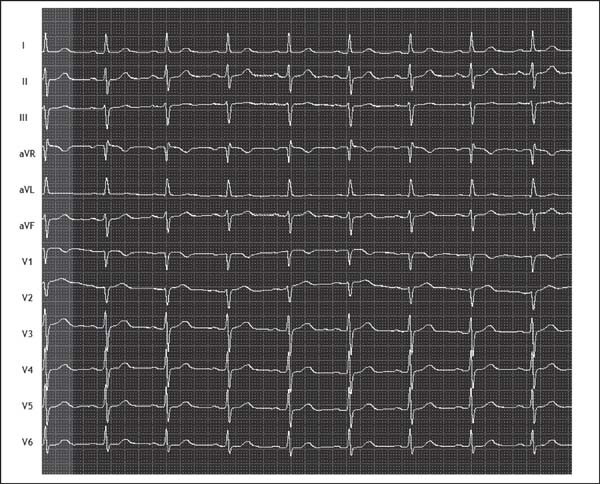 A female 82-year-old Caucasian patient with a history of paroxysmal atrial fibrillation (AF) for several years, with palpitation crises of varying duration between a few minutes and several hours, without clinical control, using beta-blockers and diltiazem. The patient presented complaints of fatigue on moderate efforts, without precordial pain or syncope, with progressive asthenia and indisposition. She informed three previous hospitalizations for chemical cardioversion of AF.

The patient had a history of systemic arterial hypertension, hypothyroidism, and atherosclerotic heart disease, and underwent coronary angioplasty in 2014 with the placement of a nonpharmacological stent, without a prior heart attack. She was on regular use of irbesartan 300 mg, clopidogrel 75 mg, and levothyroxine 75 mcg. Over the past eight months, there has been a worsening of AF crises, and she started to take propafenone in increasing doses, initially 150 mg BID, without improvement of symptoms, then 300 mg BID and currently 750 mg/day (300 - 150 - 300 mg 8/8 hours), without control of palpitations and with feeling of discomfort and weakness.

On physical examination, the patient was in good general condition, with no significant abnormalities. Her blood pressure was at 135/80 mmHg, with a heart rate of 72 bpm, irregular rhythm due to the presence of extrasystoles, normophonetic sounds in two times and mild systolic murmur at a mitral focus.

Laboratory tests were within normal limits. The patient presented Doppler echocardiography with left ventricle (LV) with standard segmental dimensions and contractility, ejection fraction of 68%, slight concentric LV hypertrophy, left atrium with slight increase (44 mm), alteration in LV distensibility, presence of mild mitral valve insufficiency and absence of pulmonary arterial hypertension or dilatation of right chambers. A 24-hour Holter performed one month before the examination showed the presence of sinus rhythm, mimic frequency of 49, maximum of 86, with a mean of 64 bpm, presence of rare atrial ectopias (29 isolated, 1 episode of atrial tachycardia with 5 beats and atrial frequency of 108 bpm), rare ventricular ectopias (78 isolated, without pairs or ventricular tachycardias) with first-degree AV block during sleep, QRS with duration at the maximum limit of normality (0.12 s) and nonischemic changes of ventricular repolarization.

On this occasion, we opted for the suspension of propafenone and the introduction of amiodarone. This decision was based both on the inefficiency of the drug in controlling AF crises and on the interpretation that propafenone could have some role in the electrocardiographic pattern of SBr (see discussion below). Also, the prevention of thromboembolic accidents was optimized, with the replacement of clopidogrel by oral anticoagulants. The patient did not accept the suggestion of treating AF by catheter ablation.

Fifteen days after changing the antiarrhythmic medication, the patient returned to the clinic, and a new electrocardiogram was performed, shown in Fig. 2, with an evident disappearance of the SBr pattern.

The patient presented significant clinical improvement, remaining for more than two years without clinical recurrence of AF, with control by serial Holter without significant changes, keeping the electrocardiographic pattern free of the SBr pattern.

Brugada syndrome (SBr) is a clinical entity characterized by the presence of a pattern of right bundle-branch conduction disorder, ST-segment elevation in right precordial derivations, risk of severe ventricular tachyarrhythmias and sudden cardiac death in patients with a structurally normal heart1,2. In its pathophysiology, there is a clear understanding of the presence of a genetically determined disease, involving genes responsible for the transport of sodium, potassium, and calcium ions through the cardiomyocytes' cell membrane2. Thirty percent of patients with SBr have a mutation in the SCN5A gene, responsible for the alpha subunit of sodium channels, and more than 20 other mutations may be involved in its phenotypic manifestation.

Typical electrocardiogram alterations in SBr may suffer dynamic alterations dependent on several factors, such as autonomic balance, fever, or use of medication.

The classical electrocardiographic manifestations of SBr may present spontaneously or be revealed by intravenous administration of class I antiarrhythmic drugs, such as ajmaline, procainamide, flecainide or pilsicainide. When the electrocardiographic pattern of SBr is inconclusive in baseline conditions (SBr types 2 and 3) and becomes typical after chemical sensitization (SBr type 1), we classify it as "drug-induced SBr type 1". This maneuver is routinely used in electrophysiology laboratories for diagnosis and risk stratification of SBr.

However, the development of the electrocardiographic pattern of "drug-induced SBr" as a consequence of the adverse effect of the medication is much less known and discussed5. Several reports in the literature have shown that in the same way that some medications can prolong the QT interval and generate the so-called "acquired long QT syndrome", some drugs can cause clinical and electrocardiographic manifestations compatible with SBr type 13-5. Among the pharmaceuticals involved in the occurrence of the phenotypic pattern of "drug-induced SBr" there are class IC antiarrhythmic drugs (propafenone, flecainide and pilsicainide, but in Brazil only propafenone is commercialized), tricyclic and tetracyclic antidepressants, anesthetic/analgesic agents (bupivacaine, propofol, procaine), antipsychotics (lithium), antiemetics (metoclopramide). Cocaine and alcohol are also among the drugs that can induce the SBr pattern. A complete list of drugs potentially involved in "drug-induced SBr" can be found at www.brugadadrugs.org.

The practical importance of understanding the so-called "drug-induced SBr" is that many patients with channelopathies such as SBr (manifest or latent), short QT syndrome, J wave syndrome, among others, may develop it with atrial fibrillation and be treated with propafenone, manifesting an increased risk of potentially severe ventricular arrhythmias6,8. There is still no consensus if all manifestations of "drug-induced SBr" present the same prognostic significance, with reports that different drugs at different doses may present different risks of development of ventricular arrhythmias9.

Currently, we believe that patients with a clinical or electrocardiographic pattern compatible with SBr should be investigated about the possible use of medication that may be responsible for the condition and, if this information is positive, suspend the use of such drug. This was the case with the patient analyzed in this article, diagnosed as "drug-induced SBr", which was reversed after the suspension of propafenone.

Patients with a confirmed or suspected diagnosis of SBr should be advised that various drugs may cause serious clinical problems. The dissemination of websites such as www.brugadadrugs.org may help in the prevention of serious complications. Knowing the potential risk of the so-called "drug-induced SBr" makes us believe that it is mandatory to perform a 12-lead electrocardiogram in patients who initiate the use of drugs suspected of revealing latent cases of this type of canalopathy, in the same way as we do with drugs with the power to prolong the QT interval. In cardiological practice, taking this precaution when prescribing propafenone, one of the most common drugs used in the treatment of AF10, becomes, in our opinion, a more than recommended, but necessary precaution.